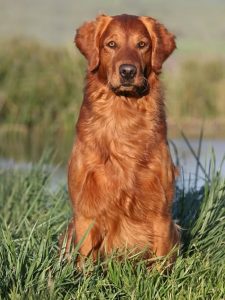 Trek gained his double QAA status in 2009 with Qualifying wins in both the U.S. and Canada as a two year old. The weekend after his 3rd birthday, he earned a Judges Award of Merit in a U.S. Amateur. In 2010 and 2011, Trek won all-age placements in both the U.S. and Canada and qualified for 5 Canadian Nationals. He also finished his Master Hunter title in the U.S. with 6 passes out of 6 tries and qualified for the 2011 Master National. Trek has started 2012 by WINNING the VIRC Open on April 21st and finishing his FTCH AFTCH titles! He then went 8 series in the 2012 Canadian Amateur National FT Stake! Trek has an Amateur WIN in the US in 2014. Trek has been entirely owner trained and handled.

Trek is OFA Good with elbow, eye, heart, and prcd-PRA clearances. He is an ICT carrier and NCL clear. He has sired some very promising litters, including 7 QAA offspring, MACH and MH dogs. His puppy owners have raved about their pups. One with 32 years of experience with performance dogs said hers is the nicest puppy I've ever had.

Trek is now retired and enjoying the good life with Judy.

Trek is available at very limited stud only to bitches with approved pedigrees and advanced working titles.